LOST in the background

When watching LOST I always enjoy noticing what the other castaways are doing. You know..the ones in the background...who are toiling away......digging in the sand, chatting it up, nodding a lot when Jack is explaining stuff or just plain hanging about doing nothing. They don't mingle with the cool kids like Sayid, Kate and Sawyer, rather they keep their distance. They don't head off with "the gang" to find food, explore DHARMA stations or any of the useful survival sorts of things. No they basically loiter about waiting to either A. run from the smoke monster B. run from the Others or anyone else that is shooting at them C. nod their heads when Jack is explaining stuff. They are..the ambient castaways.

Now the ambient castaways don't have to be in the background forever. They can elevate themselves to the next level, which is convenient castaway. This can happen when one of the primary characters actually speaks to one of them, for what seems like, the very first time. "Find Kate...person I have never talked to until now." Or they may voice concerns at a tense moment, to which a primary character must respond.

Take last nights season premiere were we are introduced to Neil. He is pissed about the time shifting and is not gonna take it laying down...in the background, where no one can see or hear him. He is up front yelling at Bernard and trading barbs with Sawyer.

This could mean one of two things. Neil is being elevated to official secondary castaway ala Rose and Bernard or.....he will be dead momentarily. Unfortunately for Neil the ladder was true..as he shifted from convenient castaway to expendable. Neil-cabob anyone?

And this is the risk you take as an ambient castaway trying to make the leap to secondary castaway. It is not an easy move by any means, especially if you happen to be annoying. Like Arzt. Remember him? Mr Science Teacher...I'm sooo smart...careful with that dynamite blah blah blah BOOM...your dead.

Or perhaps Nikki and Paolo.

These two made a good effort, slinking their way from the background to the foreground almost overnight. They even went trekking through the jungle with some of the primary characters which is mostly unheard of for anyone below secondary level. A couple episodes later they are being buried alive by Sawyer and Hurley....ewwww nice try.

Now there are those times when the ambient castaway will find himself in the worst predicament of all. This is when they are elevated to conveniently expendable. A sure sign that this is about to happen, is whenever there is a lot of shooting. We may be led to believe that a primary character will be injured or killed, only to have a expendable castaway conveniently get in the way. This is an ambient castaway's worst nightmare.

Background characters, I enjoy watching you hanging about and I want you to be safe, so please heed my advice. Just stay back there. If you absolutely have to talk to a primary character keep it short, do not make eye contact and do not let them learn your name. When an attack comes be sure you are not running nearby any primary character, in fact hang back when the attack first starts as the primaries are always likely to be leading the way. Remember no one is aiming at you because your a nobody....keep it that way and you just might survive.
Posted by RayChase at 10:49 PM 7 comments:

This past weekend I put away the last of the Christmas decorations. As much as I love Christmas I was very glad to have the house back to normal. Fortunately, this years deChristmasfication ended without incident...unlike.....last year.

Post-2007 Christmas. It is January '08 and I had just installed some metal shelving racks in the garage to better hold the many tubs o Christmas decor. These racks have L shaped corners which allow for the shelves to be adjusted. As I am bending over to place a tub on the bottom shelf I slipped and fell into the rack, with the top of my left hand slamming into one of the metal L shaped corners.

EEeeeeouch!!! pain shot up my left arm. I pulled my hand back to see that the L corner had sliced the knuckle of my middle finger....pretty darn deep...there was thickness . My knuckle now had a meat flap and I swear I could see bone. Better not look too close or I was sure to pass out in the garage, where I would bleed to death.

Into the house I went, yelling to the wife that I needed a band aid or ten. I stuck my hand in the sink and turned on the water and when the water met meat flap, man or man that hurt. I wrapped my hand in a towel and stuck my hand under my right arm. My wife suggested I go to the doctor, that it would most likely need stitches. Doctor?.... HA!! I have a stable gun if it comes to that and no, I don't need no stinking doctor. I had her call her father instead. He's not a doctor, but he watches them on TV.

While standing there with my hand tucked under my arm, I started to feel dizzy and the tall glass of orange juice didn't help...thanks for nothing vitamin C. My wife's father said I was probably going into shock. Really? Shock? Well ok, let me lay down with my feet elevated. Wonder-pea laid next to me with her feet up. Apparently she was in shock as well. While we laid there in shock, I realized that had the L corner taken the knuckle clean off, I would have most likely died since my body seems unable to handle minor injuries.

After applying pressure to the hand for about 15 min, the bleeding stopped, but I needed to keep my finger completely straight. The slightest bend of either the middle or forefinger was enough to pull the skin around the meat flap and start the bleeding once more. Again I scoffed at the idea of seeking professional medical attention. Instead I took jumbo popsicle sticks and taped em to my middle and forefinger. And oddly enough, it worked quite well at keeping those fingers from bending.

The next morning I took a look at flappie and it seemed to almost be reattached. Small movements of my finger didn't reopen the wound or anything. Amazing! I was like that cheerleader on that show. Until...I rubbed it against a towel...the wrong way.... and the pain and the blood all came rushing back.

I made one last attempt at MacGyvering my injury. This time with the popsicle sticks and a big medical pad (that would be used for a gun shot wound) bandaged on top of ol flappie. Success. My fingers would not bend, nothing would brush up to, rub or otherwise anger flappie...let the healing......begin. Now if only...I could....tie.. my...shoes.....arggh....

Yeah the big ass Sleestack hand I had for the next couple weeks was sort of a pain, but I made do and flappie healed up nicely. And best of all, I didn't have to go to the doctor.
Posted by RayChase at 12:23 PM No comments: 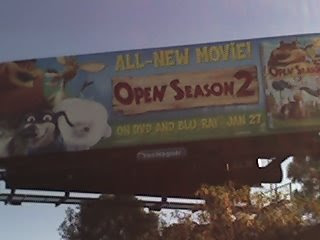 An extended clip from Open Season 2 is available HERE

Billboards are popping up as well. Chad Sellers snapped this one out in LA.
Posted by RayChase at 11:51 AM 1 comment: