This post is going to be full of spoilers so if you don't want to know anything about the movie stop reading now. Incidentally if you have seen Superman: The Movie then you already know quite a bit about Superman Returns. If you recall in Superman: The Movie, Superman crashes near the Kent farm, goes to Metropolis to work at the Daily Planet and goes flying with Lois. Meanwhile Lex Luthor has a crazy real estate scheme, is sort of a buffoon and has a goofy female sidekick. Well guess what? All that same crap happens in Superman Returns-sigh-

Yes nostalgia for the original movies starring Christopher Reeve runs pretty high in this new film. Some of it works and some of it doesn't. It's actually supposed to be a sequel of sorts to Superman 2, which again, works and doesn't. More of that in a minute. Brandon Routh, who has a strong resemblance to Reeve, seemed to be trying too hard to act like his predecessor which just didn't work for me. I think he makes a good Superman, I just wish it didn't feel like he was doing an impersonation of Reeve a lot of the time. Also, I was never a fan of the klutzy, goofy Clark. Yet here he is again acting like a dork and saying "golly" and "swell". It's not 1978. Yet the film felt less like an update of the character and more like a homage to the previous films.

Lex Luthor. I was jazzed when I saw the trailers because I thought "ah Spacey is going to play him like a crazy, evil genius". Well actually no. He is pretty much on par with Gene Hackman's portrayal, minus the used car salesman smile....-sigh- One of the things I enjoyed with Lex is that he finds his way back to the Fortress of Solitude (remember he was there in Superman 2). Here he gains knowledge about the crystals that are held in that giant...crystal...holder thing. Very cool. He is planning to use the knowledge, meant for Superman alone, for some evil purpose. So what are you going to do with it Lex...something cool...something genius... something evil. Why no. I'm going to grow my own continent. Oh......wow...that is....uh..what? See I'm going to destroy North America by replacing it with a giant, ugly, grey Krypton looking thing. In the process everyone and everything in North America will be destroyed, sending the world economy into a downward spiral. And then people will pay me money to live on my giant, uninhabitable chunk of rock. People? what people?...like all the one's you just killed? Who the hell is going to move there? Europeans? Why would they.....gee thats huh...brillant Lex.

Sound pretty stupid, that's because it is... When he discovers what the crystals can do I figured he would hold countries for randsom or terrorize the world. Weaponize the crystals so that he could attack a country and lay it to ruin when the crystal grows and expands. Nope. Nothing so nasty.

Now are ya ready for more silliness? Sure you are. Time to play "how much kryptonite does it really take to hurt Superman". When Lex uses a crystal to build his super continent, the entire damn thing is laced with kryptonite. Here comes Superman flying towards it, he senses nothing, he lands on said kryptonite laced continent still nothing. After some banter with Lex he approaches the bald one and oh wait, he starts to sweat and then BAM Lex punches him and Superman goes flying like a rag doll.

So your surrounded by this much freakin green rock and you don't feel even a little odd...like mmm..eeerrr..either that burrito didn't sit well or I may be losing my powers. Nope nothing. Taken completely by surprised. Then, in what is probably one of the best sequences in the film, Lex's goon's beat the crap out of Superman who apparently forgets that he has other powers like heat vision and super breath. Oh no I am surrounded by kryptonite that I didn't know was there...I am now a girlie man.....not the face!!

They beat him silly and then Lex stabs him with a kryptonite shard and breaks it off...so yes...now there is a really big piece of kryptonite stuck INSIDE Superman...and he is still not dead, bruised or bleeding. Later on he will toss this kryptonite laced continent, which is the size of Texas, into space. At this point just being near the stuff nearly kills him. But having the HUGE piece wedged into his rib cage.......not so bad....I'm feeling surprisingly ok.

Now, for the big "oh my god are you freaking kidding me". Lois, in the time while Superman was gone..because remember he returns in this movie (it's in the title), has had a son whose father we assume, is live in boyfriend Richard White (Perry's nephew). The big twist is that it is really Superman's son. The thing that makes this such a huge twist that you never saw coming is many fold: #1 in Superman 2 Sups and Lois knock boots AFTER he gave up his powers #2 at the end of Superman 2 he gives Lois the krypton kiss of forgetfulness and she forgets everything that happened in the movie #3 since Superman was gone for 5 years and this kid is at least 5, he must have left Earth immediately after Superman 2, leaving Lois who is now immediately pregnant to hook up with Richard White...immediately......stupid, lame, retarded...
yes, yes and yes.

So now yay Superman has a son with powers....great. Maybe in the next film he will teach Superboy how to use his powers. Can't wait to see that. Then Lex, who is in every movie, will capture young Superboy and force him to sell real estate in Florida. -sigh-
Posted by RayChase at 1:06 AM 4 comments:

Praise the mother our offical web site is (mostly) up! I was starting to get really, really tired of looking at the teaser site with the giant finger. Go take a look and click on things to make other things happen. It's so much fun!! Go here.
Posted by RayChase at 12:39 AM No comments:

At long long last it is here! I imagine it will be showing in front of Cars tomorrow, but if you can not wait (and who could) then go here and click on Trailer No. 2
Posted by RayChase at 8:33 PM 2 comments:

Yes it is true dear readers I have returned from pan handling across America. Thanks for all the nice comments while I was away. While there is not anything concrete on the new job, I hope to announce something very soon.

During our trip I celebrated by 35th birthday. Yes yes very exciting. And I got to spend the day with the wife and Wonder-pea at the Magic Kingdom which is not a bad place to spend the ol birthday.

Now it is no secret that I am a HUGE Pirates of the Caribbean fan; the ride, the movie, the broadway show...I love it all. But unfortunately, when we made our way over to the POTC ride this is what awaited me: 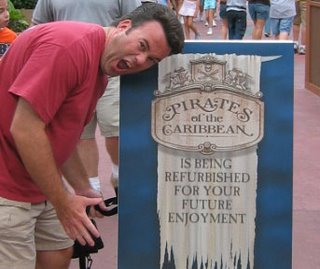 I am woe and woe is me. But then I noticed yet another sign. What is this…dead mean DO tell tales…intriguing says I… 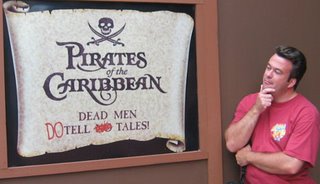 I’ve been catching the trailer for Dead Man’s Chest and I got to say that I am so jazzed to see this movie. Speaking of movies…

Remember that movie The Ant Bully that I did a couple things on? Well it was supposed to come out Aug 4 but while on my trip I thought "Why make the people wait?" So I made a few phone calls and got the release pushed up to July 28th. Mark your calendars accordingly.
Posted by RayChase at 7:36 PM 2 comments: