One of the things that kept me pretty darn busy for the first half of this year, was our new wooden playset. We wanted to put one of these in for the kiddies and right after the new year began, we starting shopping around. The design we wanted would have two towers, a princess one for Wonder-pea and a pirate one for Lil Pumpkin. The towers would be connected by a bridge. That's not too much right? But to get what we wanted would have cost upwards of $10 thousand dollars; and no I'm not exaggerating.

So we considered getting a playset not as elaborate but were unhappy with what we could get for even $3 thousand. There was a vision of what we wanted and settling wasn't an option.

Around this time a friend at work, Aja Bogdanoff, built a pretty awesome gazebo around her desk. It seemed pretty complicated but she researched it, drew up plans and made it happen. With that in mind I told my wife that I would be building the wooden playset....she concluded that I was insane...I agreed and began planning.

I looked at a lot of store bought sets and even bought a plan for a smaller, single tower one, just to deconstruct it and figure out what I wanted to do. I've built stuff in the past, pirate cove, a fish tank table etc, but this project was well beyond anything I had ever done.

This is what I came up with. Ah to be insane. It seemed so little and cute and doable in Maya. 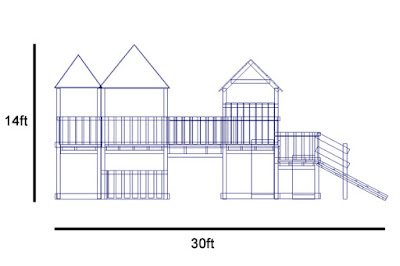 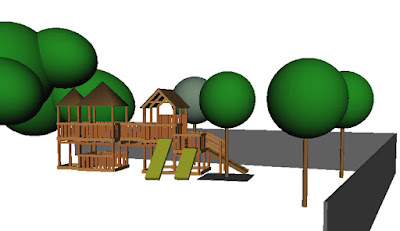 Ground breaking! Lil Pumpkin inspects the site for his pirate fort. And then its time to frame! I used 4X4 cedars posts...strong and sturdy and they smell good too. 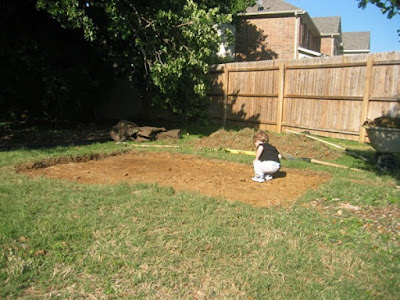 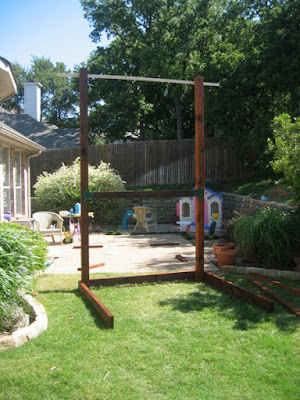 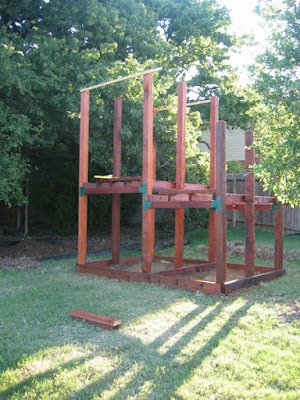 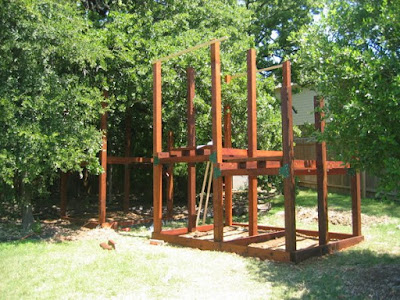 It soon became clear that my cute, little playset was in fact huge and monstrous. I started to feel slightly overwhelmed. The first modification to the original plan was losing the small princess tower all the way to the left. I need to step up construction and it wasn't that big to be of any real use. We may put a tubular slide over here next year. 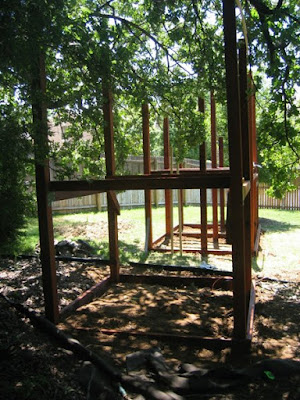 The building inspector lends a hand. 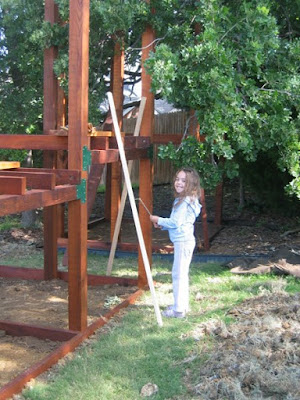 Ramp time! The second modification was the length of the ramp. On the original plan it just wasn't long enough. We wanted something that Lil Pumpkin could get up fairly easy and the orginal plan would have had him practically climbing rather than walking. 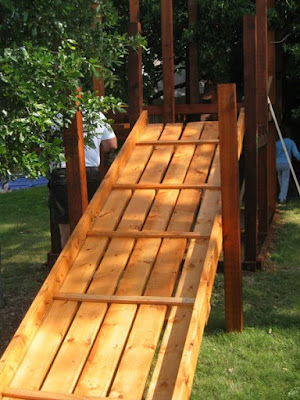 The building inspector approves the ramp. 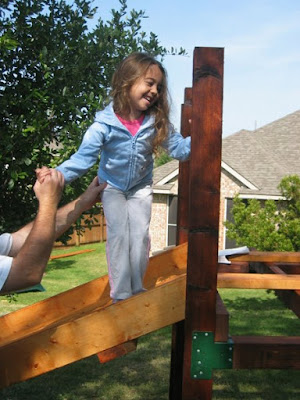 Time for some floors and slides. 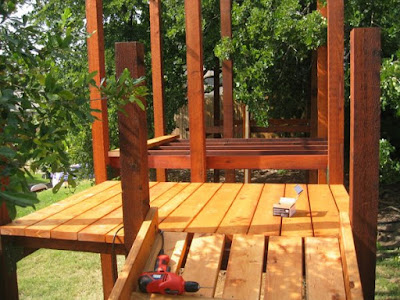 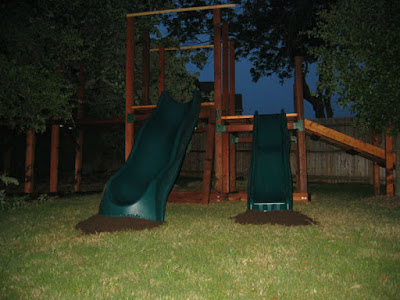 The building inspector spots a mistake. 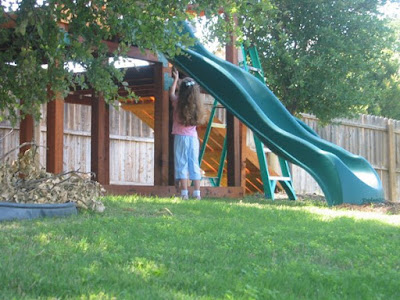 Shame on me for not being better with the pictures. My Dad said I should have taken pictures every step of the way, which was my intent...but alas...I sorta didn't. Soooo, rails, spokes and 2 roofs later it was done. 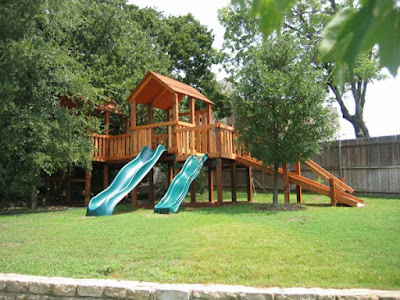 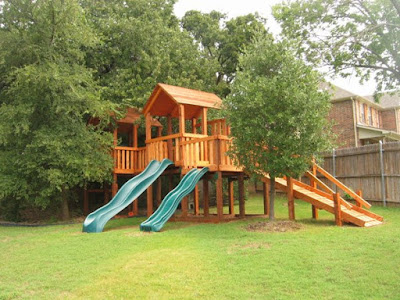 I tried to trim as little as possible off the trees. It fit pretty well into our "forest"; the princess tower is mostly hidden by the foilage. 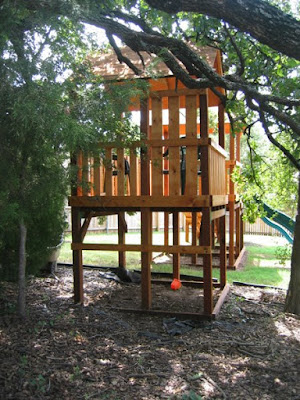 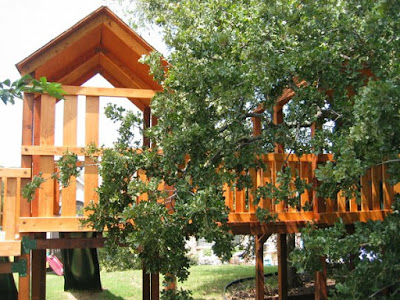 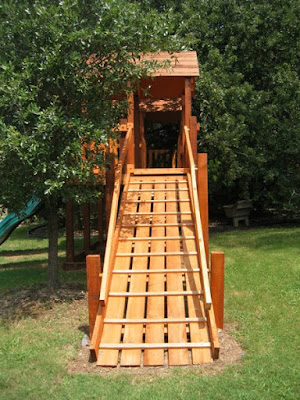 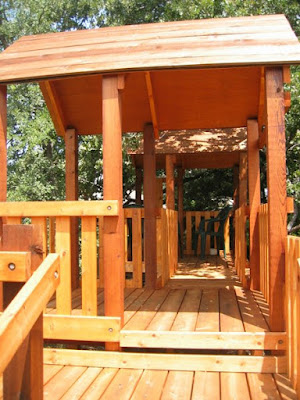 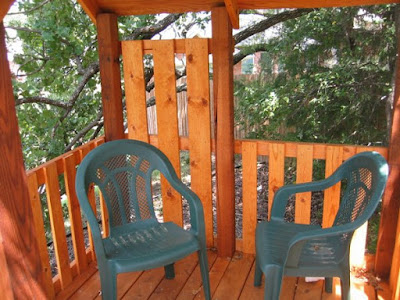 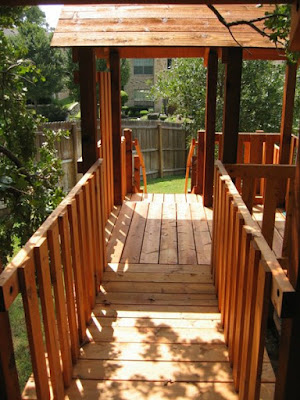 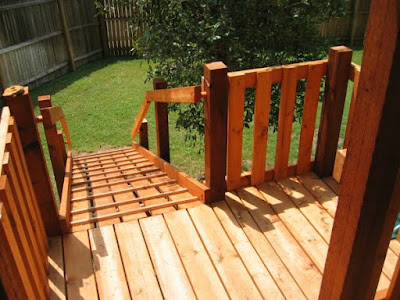 View from our back porch. 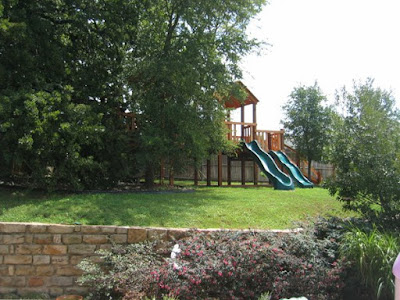 It took a loooooot of time, much longer than I anticipated, but it was worth it because we got what we wanted and the kids love it. HUGE thanks to my Dad who made two trips from Florida to help me out; I couldn't have gotten the framing or roofs done without his help.
Amazingly I only had three major plan modifications and only a couple minor screw ups; the original plan for the princess roofs was for them to be pyramid/gazebo-like..but I couldn't quite get it to work.
I estimated that I spent under $3 thousand for the whole thing which is not bad. Man hours..I couldn't even guess. Many a weekend, I was out there from 8am-8pm, but it was actually pretty fun so it didn't feel like exhausting work.
There is more I need to do to it; put floors in the bottom sections, add a ships wheel, telescope and post caps on the little deck as well as some pirate and princess theming elements to both towers. Once the weather gets cooler this fall I will be back out there for phase 2.
My wife was so impressed with how it turned out, she is making a small list of things she wants built. Compared to the wooden playset, entertainment build ins and bookcases should be a breeze.
Posted by RayChase at 4:19 PM 5 comments:

I love everything about this short; very well done.

The official web site: Oktapodi
Posted by RayChase at 5:10 PM No comments: 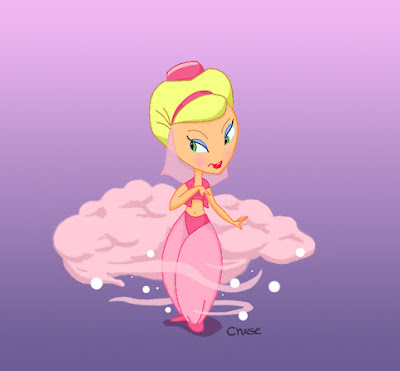