The marathon started at 5:30am in front of Epcot. I had read several accounts of previous marathoners that the traffic getting into Epcot the morning of the race can be hellish and that staying on property and using Disney transportation was the way to go. And this is what I did. My parents got me a room at the Polynesian which is near Magic Kingdom and is right next door to the monorail station.

The night before the race I didn't get much sleep. I tried to go to bed early but Magic Kingdom's fireworks kept me awake and then general anxiety did the rest. I got maybe 3-4 good solid hours. Again I had read the key is to get a lot of sleep in the days leading up to the race, in case you lie awake the night before.

The run started at 5:30 am and I was up at 2:30am; so weird to be getting up that "early". After getting myself ready and going to the bathroom...a lot, I left the hotel for a short walk to the monorail and was on my way.

The set up in the parking lot of Epcot was pretty nice and well organized. I didn't check a bag but the bag check seemed much better than the Wine and Dine. After going to the bathroom two more times it was time to head to the start which was a long slow walk out to Epcot Center Drive. Man it felt like we were walking forever. Oh and did I mention it was cold? Not freezing cold (that was the 2010 WDW Marathon..20 some degrees at start..brrrr)but in the 40's and breezy. When we finally arrived at the corrals I noticed several runners heading off to the nearby brush for a last minute..potty break. I looked around "hey...people are peeing...no one seems to care?...ok". Apparently running a marathon gives you leeway to pee in public.....so I did too. I mean hell, why not right?

There were 8 corrals and I was in the 5th..corral E. Unlike the Wine and Dine I could see the start so when the race began and there were fireworks and fire, I could see it all. There was an overpass behind us and shortly after all the hooplah in front of us there were fireworks and fire shooting off the overpass behind us as well. Everyone seemed surprised and it was pretty cool having pyrotechnics going off all over the place.

Unlike the Wine and Dine and other previous WDW marathons, they did a wave start with about 2 minutes between waves. Our corral approached the start, they gave us a 10 second count down and with music and pyrotechnics blasting we were off! 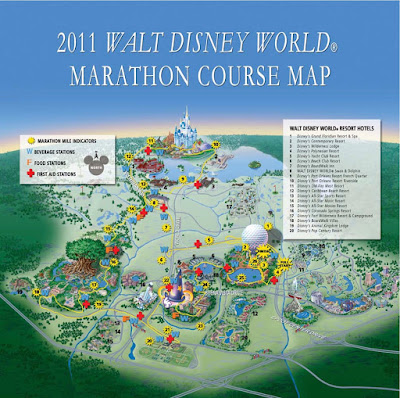 The Clif Bar 5 hour pace team was a little ways in front of me and I figured if I could keep line of sight on them I would be good. We went down Epcot Center Drive then turned to pass through the Epcot Toll Plaza then on up to the park. As we entered Future World I noticed some runners peeling off to use the park bathrooms. Standing out in the cold and having a bladder the size of a pea, I did need to go. I figured I'd be better off stopping and starting at mile 2 than at mile 20 so I zipped into the restroom for a quick pit stop. This would be my only stop the enter run.

Back into the fray I quickly caught up to the Clif Bar pace team as we entered World Showcase. It was really cool being the only ones in the park. The Christmas decor was still up and it was just nice running through there; quiet and peaceful. We exited World Showcase between Norway and China, I think, through some of the backstage area making our way back to Epcot Center Drive. Next stop: Magic Kingdom.

My least favorite thing about the Disney marathons are the banked roads. Anytime you come down off an overpass or god forbid up onto an overpass, you are running on banked pavement and man oh man there is just no flat spot. When we exited Epcot Center Drive onto World Drive, the big circle ramp down was not loved by my legs at all. My legs never really hurt mind you, but they felt really weird. Odd pressures being applied because of the slanted road.

At some point here I passed the 5 hour Clif Bar pace team. I thought "this might not be a good thing", but I couldn't exactly turn around and go find them. Onward!

As we headed up to Magic Kingdom I thought I was hallucinating because I saw Spaceship Earth in the distance. What the hell, we just left Epcot! It was actually a Epcot hot air balloon that was anchored...whew! Worried me for a second. Pretty much every half mile or so there was something to see. Characters you could get a picture with, actors from the park, parade floats, high school bands, lots and lots of on course entertainment.

We zip zagged a bit through Magic Kingdom's parking lot up through the Transportation and Ticket Center (monorail station). As we approached the TTC I was a little overwhelmed by how many people were out cheering us. It was early and cold and I didn't expect that many people to be out, but there they were. I had told my parents to hang out here if they wanted to see me and I did see them (and them, me) as we ran through the TTC and up to the park.

We entered the Magic Kingdom by Tony's Restaurant and made a right up Main Street. The right side of the street was coned off for runners while lots and lots of people lined the left. We made a right into Tomorrowland, running into Fantasyland and out through Cinderella's castle. Out of the castle it was a right into Liberty Square then through Frontierland and out the backstage (parade exit) next to Splash Mountain. They had a pirate ship float parked back there with Jack Sparrow, Barbossa, several more pirates and movie music blasting. It would have been cool to stop for a picture.

Many people were stopping for pictures throughout the run. This one guy was in a spandex Incredibles outfit. I would see him standing in line to see Chicken Little or Goofy, then he would blast past the rest of us on to the next photo op. Unfortunately for me, once I have racked up several miles I can no longer stop running and then start again. I can't even walk and then run. So no photo ops for me.

Leaving Magic Kingdom is was on to Animal Kingdom. I had read that this was the "worst" part of the run; there's not much to look at for about 4 miles and that this leg of the run feels long. Honestly it was not too bad, although somewhere between 15-16 miles I started thinking about how much further I had to go. Bad idea. If you think about it too much you will mentally psych yourself out; which started to happen a little.

Coming through the backstage area of Animal Kingdom we past a wonderfully smelly garbage plant and/or sewage plant. Mmmm boy that's what I want to smell right about now! Yuck! Seems like we entered Animal Kingdom around Kilimanjaro Safaris and headed left towards Everest. A cast member was out in front of Everest telling runners that the ride was open if anyone wanted to ride. Several peeled off to ride the coaster, but if I had sat down at that point I would have never gotten up. By now the parks were starting to open and guests were appearing in the park. Yay more spectators!

Leaving Animal Kingdom the course became very similar to the Wine and Dine as we got out onto Osceola Parkway heading towards the ESPN Wide World of Sports. Getting closer to mile marker 20, I was starting to feel it. I didn't hurt and I didn't feel wiped out, but goddamn we've been running a long time. The 5 hour Clif Bar pace team passed me and I wondered if I should speed up. I have NEVER run more than 21 miles and I was a little worried that if I tried to push, I might flame out at mile 24. I decided that it wasn't important to "hit the gas" and to just focus on finishing.

Passing mile marker 21, I entered unknown waters. This was now the farthest I had ever gone. Only 5 more miles. No problem.....right? I knew I had slowed down my pace, hence the pace team pacing me, but in general I felt ok, just getting tired. We entered the Studios behind the Tower of Terror and ran through the backstage area, emerging on New York Street. We reached the beginning of New York street and made a left onto Commissary Lane, then it was down Hollywood Blvd to the front of the park. Lot's of hooplah and people cheering; it was pretty awesome.

The run back to Epcot was just like the Wine and Dine. I had passed mile marker 23 at the Studios and it felt like hours before I reached mile 24. Where is it!! For the love of god where are you mile 24! We entered Epcot between Canada and the United Kingdom and made a right. Oh fantastic...nice big incline to get over to France. In my mind I surmised that this was the last hill, which made me very, very happy.

As we left World Showcase I heard someone say "hey we were just here 5 hours ago". Yeah I guess we were..lol. On to Future World and the end was getting near. I had passed mile 25 somewhere in the countries so mile 26 was getting close. I heard a runner say "it's only a half mile now!", which made me very, very happy. We could start to hear cheering and the DJ and I think everyone was getting pumped. I rounded a turned and after a moment I could see the beginnings of the crowd.

I started to get a little emotional at this point. It was all rather overwhelming. I had thought for so long that I would never be able to do this. As I've gotten older NOT running this marathon had become something of a regret. Even 6 months ago it didn't seem like a possibility. Now I was about to finish it, running the whole way just like I wanted.

I pulled myself together, figuring that I would not be able to run if I was blubbering like a baby and how embarrassing would that be to flame out .5 miles from the finish.

I ran as hard as I could that last half mile. I crossed the finish line with a chip time of 5:10:53. As soon as I stopped running.. my thighs felt like there were about to explode. OMG they hurt! I received my medal and slowly walked to the food tent to get some snackies, then on to meet my parents.

Later in the day, thinking back on the run, it almost seemed like a dream. Holy crap did I really do that? My aching legs reminded me "YES! Yes you did...we hurt!"

As with the Wine and Dine, the volunteers were fantastic. A big thank you to all of them and to my parents for coming out so early in the cold. This is only my 3rd run (did the Dallas White Rock Half in December) but I think it's definitely my favorite. They have this thing called the Goofy Race. If you run the Half on Saturday (Donald medal) and the Full on Sunday (Mickey medal) then you get a third medal...a Goofy! That's 39.3 miles in two days. You'd have to be freakin Goofy to try it and next year, I think I just might be :) 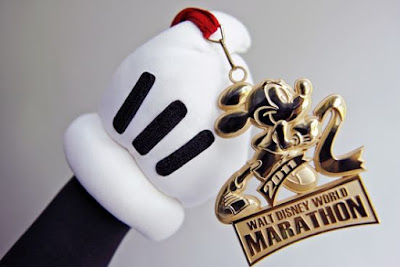