I'm super excited for this one. Go Panda!!

Posted by RayChase at 3:19 PM No comments:

Not gonna buy it. Not gonna rent it.

Look at him over there, sitting in the rain, looking all depressed. What went wrong with my movie? Too many characters? Too much dancing? Too much crying? Yes, yes and hell yes.

Have you forgotten dear Spiderman why your 3rd outting sucked so bad? If so, reread what I wrote about it here and then here.
Posted by RayChase at 5:03 PM No comments: 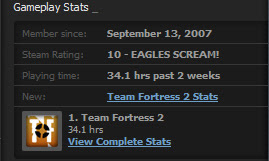 Tonight I hit a steam rating of 10 after spending about a week bouncing around in the 9.somethings. Woohoo!! I have no idea what this rating means but woohoo!!

I've been playing TF2 a lot and by a lot, I mean A LOT!! I need to ween myself down on the game play so I don't burn myself out. I've been telling myself that over the past two weeks. Apparently I'm ignoring myself.
Posted by RayChase at 2:37 AM 3 comments:

There is a new shirt design in the My Shop area.....hard to believe? Tell me about it. It's the first new anything to go into My Shop in months. One wonders how long My Shop will stay in business.
Posted by RayChase at 9:53 PM No comments: 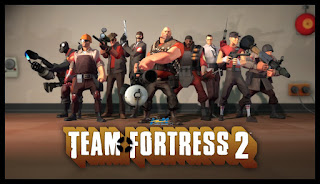 TF2 is out!! Yes its true. I have been playing the Beta Orange Box release for a few weeks now and its a lot o fun; I'm actually doing pretty good...who would of thunk it possible. Now you can join in on the fun by going HERE.
Big congrats to my buddies up at Valve: Andrew Burke, Hamish Mckenzie, Karen Prell and Matthew Russell.
Poll results...for: Of my 5 shows, which will rock the hardest this season
HEROES (40%)
The Office (47%)
LOST (7%)
24 (7%)
Smallville (0%)
Posted by RayChase at 1:59 PM 2 comments:

Technology is pretty awesome when it works but when it doesn't, its really really annoying. Take our dual tuner DVR for example. Recording an entire season of a series...wonderous...recording two shows at once...a miracle of the modern age. The only problem is that one of the dual tuners is flaky and must only be able to hold 6% instead of 100%.

We discovered this when the disk space suddenly jumped from 56% to 100%.

We discovered this last Thursday when we had premieres of The Office and Smallville scheduled to record at the same time.

Smallville recorded but The Office did not, even though we were at 56% full at the time of the recordings; 100% after. I jumped around like an angry monkey...hit the DVR with my club and threw a rock at the TV, but to my dismay The Office was still not showing up in my playlist.

Then I remembered that NBC had just announced that they were pulling out of iTunes making episode available for FREE, the day after they aired. Awesome. The next day I happily went to nbc.com to download The Office premiere.

The kids are in bed, the wife is ready to watch and.....why isn't it working? Let's try again...nothing. Glad to see they tested it out. Reboot..nothing...try Firefox...no.....curse at it unmercifully...nope. There is nothing NOTHING on the page that says anything about "what you need to view the shows". Brilliant. Does it use some fancy new Java plugin or magic...who knows. Also nowhere does it say "having trouble viewing the show?". No support!! Fan-freakin-tastic.

Fortunately there is a forum on nbc.com and a thread for Tech Support. Sure enough, many folks are having the same problem. This is Friday...NBC's new season launched on Monday...their player is not working and no one from "support" is telling people anything in the forum. NBC you are upsetting me.

I check iTunes, maybe just mayb-NO...no Office season 4, which the more I thought about it the dumber this seemed. People use iPods to watch their TV..to take it with them. Pulling out of iTunes completely alienates that market. But I guess NBC doesn't like making money.

So I turned to Google. For the love of god Google tell me where I can find this episode. Google returns some options but what a surprise the content has been removed...most likely by NBC. No no consumers...you will watch our shows on our broken player or you won't watch them at all!!

But then I see it...my salvation....Amazon.com. Apparently I can pay $1.99 and download the episode from something called Amazon Unbox Video. Wow sorta like ITUNES! You would think that with the problems NBC was having with their own FREE player, that they might point people over to Amazon....make a little cash and keep people happy. Insanity!

In the end The Office premiere was pretty funny...making the journey worth it; Amazon I have feelings for you...call me.
Posted by RayChase at 10:56 PM 3 comments: