The Ant Bully on DVD

The Ant Bully is now on DVD. Apparently a few people missed it while it was in theaters so hopefully those folks will give it a look on video.

Now I will admit that the cover art is rather awful. Lucas looks stupidly happy and all the other characters are in no way proportionate to one another. Don't let that dissuade you from picking it up. Most folks who saw the film in theaters (all 10 of them) seemed to enjoy it and perhaps you will too.

I did a bit of animation on the Behind the Scenes section, which I have put up in my Animation area for your viewing enjoyment.
Posted by RayChase at 9:47 AM 1 comment:

Here is my submission for this weeks DrawerGeeks because werewolves have kids too. 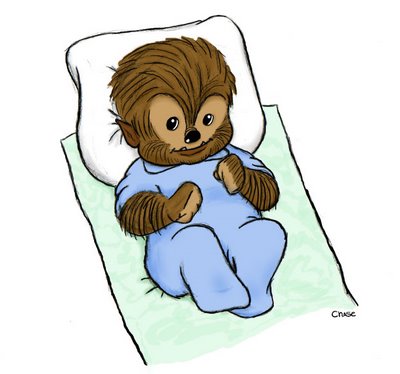 I recently answered 10 Quick questions over at Dave Johnson's bleedingpixels.blogspot.com. Other buddies o mine have done the 10 Quick, like Andrew Burke and Mike Walling. Why not stop by and have a read? When your done, take a look around the rest of the blog for some good information and links.

Dave is one of my students this quarter at Animation Mentor. Check him out at 3dave.com.
Posted by RayChase at 1:02 PM No comments:

The Very First Noel is now on sale at a retailer near you. Yes it is true! It is great entertainment for the whole family so why not run out and buy a copy. Or buy 10 copies and get that Christmas shopping done early.

In celebration of the release, I have uploaded some of my shots to the Animation area.

The offical web site has gotten a pretty nifty upgrade as well.
Posted by RayChase at 1:32 AM 4 comments:

With the help of fellow ReelFxer Jason Owen, I finally hauled all my pirate stuff up to the studio. I never realized how much I had until I had to break it down when I left DNA. My wife was thrilled when all this stuff left our house. 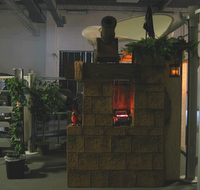 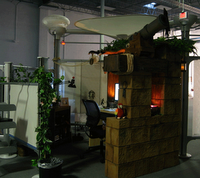 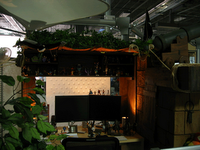 My area at ReelFx is a good bit larger than what I had over at DNA. There is actually room between the animators which is nice in case I want to stretch out and take a nap on the floor, which I frequently do.....


One of the guys has a Master Replicas Kermit the Frog.... 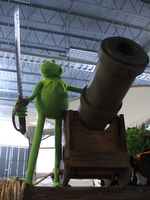 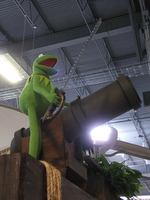 I felt much safer knowing that Kermit was standing guard. 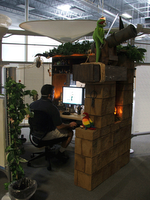 So last week was Halloween and if you were like me you ate so much candy that you went into a chocolate coma. I love Halloween. You get to dress up and be someone else for a day AND you get to gorge yourself on candy. What could be better?

How about a Halloween party. Every year my good friend and ex-DNAer, Deanna Molinaro and her husband Aaron invite all of us misfits to her house for beer and cake. This year was freezing, freaking cold so most everyone stayed inside the house.

Now you combine beer and a lot of people in close quarters and things are bound to get crazy. Take what happened with me and my buddy Ernesto Bottger.

Ernesto came as a popular character from a Spanish kids shows, super hero El Chapulin Colorado. Seeing as how I don't speak the Spanish and had a little too much Mr Beer, I basically called him Captain Hot all night. 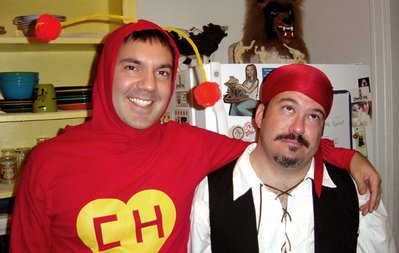 At one point Ernesto flipped out and let me have it. 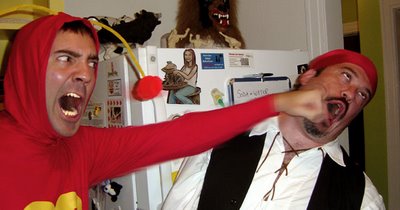 And a scuffle broke out. 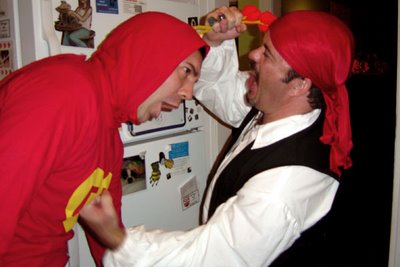 But since the alcohol was making us tired we decided to call it a draw. Because that is what Halloween is all about: costumes, candy, fighting and friendship. 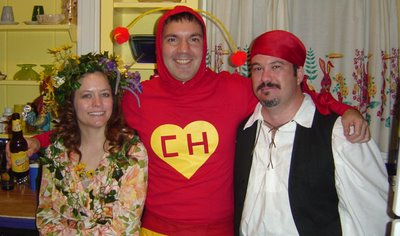 Deanna as Mother Nature, Ernesto as Captain Hot and me as a pirate....of course.
Posted by RayChase at 1:25 PM 3 comments:

A couple weekends ago we went to the annual Texas State Fair. I like going to the fair, it is a fun way to spend the day and to drop a lot of money. My god is it expensive to go the ol fair. When the day started, we were doing pretty well. As we were about to buy our tickets a nice woman turned to me and said here ya go and walked off. She handed me a complimentary ticket. Awesome. That plus a coupon that got Wonder-pea in for free, and we were doing pretty well.

But once you get inside its all over. Since they make you purchase tickets you really have no idea how much anything really costs. Wonder-pea wanted to go on a train ride which was 6 tickets. I wanted to ride with her, because I just love riding the kiddie train, which cost me 6 tickets. I figured out later that the experience really cost us about $6. Needless to say we avoided more rides. But then....there is the food.

Funnel cakes, corn dogs and anything you could ever want deep fried is all there waiting for you. In addition to fried ice cream, oreos, cheesecake and several others, this year they had fried Coke. Someone who had deep fried everything imaginable must have figure that the only challenge left was to fry a liquid.

While cruising the fair and trying to figure out how the hell you actually deep fry Coke, we passed a stand selling "fried donkey tails" which immediately made a picture in my head of tailess donkeys standing in a pen with white X's on their bums. The initial reaction was: bleah.

Later we found a food booklet that told us what a fried donkey tail was: a footlong hot dog split down the side, filled with cheese and deep fried in a tortia. My god that sounds....delicious. We sought out said fried donkey tails, devoured them and headed towards the fried cheesecake which I adore.

But something happened on the walk to the cheesecake. Maybe what I had just eaten had just registered with my brain or the smell of fried everything in the air was just too much for my stomach, but hearing the words "fried" and "cheesecake" just about sent me into cardiac arrest.

Instead we went over to the car show where Wonder-pea had a blast trying out all the latest models and as a bonus, it required no tickets. I just wish she would open her eyes when driving. 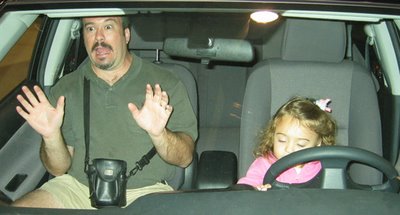