Today is my daughter's 6th birthday. Happy Birthday Wonder-pea!! Over the weekend we celebrated her birthday at Going Bonkers. The place is like Chuck E Cheese except with better pizza, a ginormous play area complete with tunnels and slides and no giant rat. 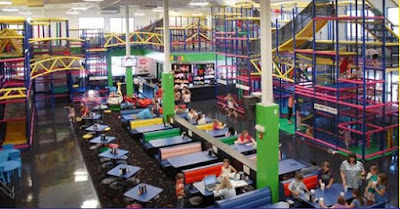 The ginormous play area is the highlight of Going Bonkers and within minutes of arriving Wonder-pea was off. Now her little brother, Lil Pumpkin, who is 2 and 1/2, wanted to explore the play set as well. The difference: my wife made me go with him. Now I will admit, it was pretty dang fun crawling and climbing through all the levels. Many times I thought "10 year old me would have gone crazy for this", but alas...I'm not 10 anymore.
The play period before pizza and cake was from 11am-noon...one hour; no problem. Lil Pumpkin and I entered the play area at 10:50. At 11:05 I needed a nap. Man oh man do you get a work out crawling through that thing.

My son had no trouble with the climbing and the crawling and since the whole thing is padded there was little chance of him knocking himself out. OK so why did I have to go with him? Basically I was there as his personal bodyguard, making sure the other kids didn't rough him up....or shake him down for pizza money.
Here we are crawling through one of the many tunnels. You can't see Lil Pumpkin because he is way ahead of me. At several points he would be three or more sections ahead of me going "come on Daddy", before climbing up another level. Now the really awesome thing about these tunnels is the many hanging obstacles that you have to push your way through. FUN! 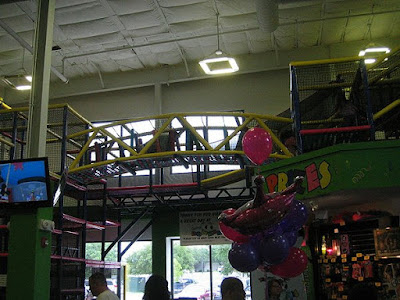 Many times I tried to slow my son down. Lil pumpkin....-gasp-.....wait....I'm coming...-gasp-....lil pumpk....lil.. I told him that he should go on with out me, that I was slowing him down and endangering the mission, but he would have none of it. Apparently we had to keep moving at all times; perhaps raptors were tracking us. I even found a spot on one of the upper sections that was near an AC vent..the air..so cool. Hey buddy let's sit here a sec- come on Daddy!!....I wept, tears of blood.
In the below photo, I'm smiling because we stopped moving for 10 seconds. It was a glorious 10 seconds. In just a moment we would climb the ramp to our left and then roll down the other side. Yippee!! Now I don't have the best posture, but with only four areas large enough to stand up straight, my back was not enjoying the experience. 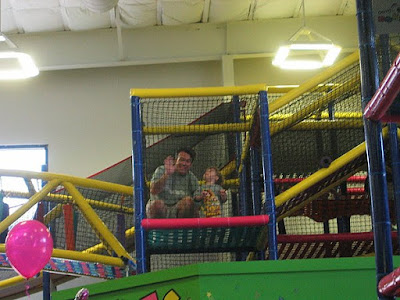 After an hour of crawling around Satan's playground, it was time for pizza and cake. At this point I was pretty damn hungry and feared that I'd go all "Tazmanian devil" at the first sign of food. Fortunately that didn't happen and the party went great. Barbie was the theme this year, so we got Wonder-pea a Barbie cake which she liked a lot. 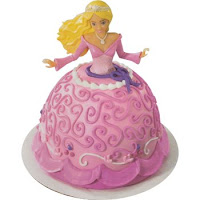 All the kiddies seemed to have an awesome time and after the eating and the singing and more eating, the partiers played some games and everyone started to leave. Lil Pumpkin pondered a return to the play area..I could see it in his eyes. I begged him to not take me back in there. There was much whining and crying on my part.

After going bonkers for a total of 3 hours, we were bonkered out. On the way home Wonder-pea recounted all her party fun while Lil Pumpkin slept, tuckered out from all the activity. When we got home I collapsed in the driveway and took a four hour nap.

A couple months ago I worked on a commercial for Play Doh, promoting their new Coco-Nutty Monkey toy. I bought one for the kids and they seemed to like it quite a lot. Dad's a hero when he comes home with a monkey.

The animation I did for the spot is up in my animation area. You can check out the entire spot here.
Posted by RayChase at 1:05 AM 2 comments: