Disney Wine and Dine Half Marathon

This past weekend I ran my first ever half marathon. The event took place at 10pm Saturday night at Walt Disney World.

Saturday afternoon, my brother and I went to the Expo to pick up my race packet. Then it was off to the All Star Movies Resort to check in. After figuring out where we would meet at the Epcot after party, my brother went home and I got ready for the run.

Because of road closures for the race, runners needed to be at the ESPN Wide World of Sports Complex (the start of the race) by 8:30pm. Since I was a little nervous about missing the bus and hence missing the race, I got there at 7:30pm, an entire 2 and half hours before the run was to begin. What to do what to do. Well, there really wasn't much to do other than sit on the ground and watch all the pre-race festivities which included a DJ trying to get runners to dance. Ok if you want to wear yourself out you go right ahead and dance your little hearts out.

Along one side of the field where we all gathered, was an army of porter potties. Seriously, if they were to have come to life they could have easily massacred everyone...there was A LOT of them. As 9pm drew near, I knew that we would start lining up soon so I headed over to use the bathroom. Each potty had a line ten people deep. Yay!

Since I had not run a race in 12 years I had no proof of time, so I was scheduled to be in the last corral, Corral D. Once in the corral, I noticed some runners weaving their way to the front of Corral D which was a good idea seeing as how we were sorta far back. I followed their lead and ended up almost at the front of D, back of C. Excellent Smithers.

It's now 9:30pm and I'm starting to get a little anxious. People who know me, know of my pea size bladder and even though I had just gone to the bathroom no less than 10 minutes ago, I now questioned if I needed to go again. I told myself "it's ok...it's no problem....it will be dark...if I have to go, I will just go and no one will be the wiser". Even though I had no intention of peeing myself as I ran, I thought this might fool my bladder. It didn't seem to be working so I played Angry Birds on my iPod to take my mind off it.

The wheelchair participants got a 2 minute head start and then it was our turn. With a blast of fireworks (that I couldn't see) the race began! Annnnnd heeere weeee stood....and stood...for at least 5 minutes. Then we began walking to the start. It must have been about a 1/4 mile walk. Finally the starting archway was in sight and the excitement was building. Crossing the start I began to run and nearly ran into a wall of walkers. Seriously? You're not even going to try to run the first mile?! Got around them and then more slow pokes. I started to get frustrated and did something I thought was brilliant. I left the road and went up on the grass. FREEDOM! A few other runners followed my lead and we were blowing by people. It was actually rather exhilarating because I felt like the Flash or something. Maybe these people were starting slowly, I don't know but I was whooshing past them.

The plan seemed to be fool proof until I stepped into a small divet and felt my left leg drop a bit and my foot point down. Ouchie. Boy I hope THAT doesn't come back to bite me in the ass. I decided I needed to get back on the road and did so quickly.

Aside from an 8K nearly 12 years ago, I have no experience running in a group of people. It is just, a little "different". I found myself constantly looking for a window to jump ahead of people. Slowing a bit to weave around this one or judging whether there was enough room between runners for me to squeeze through. It was kind of fun actually, but required a lot of concentration. I was very aware of my fellow runners though. I didn't want to clip anyone or cut anyone off and aside from some light shoulder grazing I didn't bump or push anyone.

Along the trip down Osceola Parkway, floats from Magic Kingdom's Spectro Magic were set up with photo ops with characters like Chip and Dale; heard Goofy came out later...blast I missed him!! When I stop running my body says "oh we must be done" and starts powering down. So while many runners were enjoying the fun and stopping for pictures, there was just no way I could.

The first several inclines where no problem and allowed me to get ahead of a few runner clusters. Training around my house where its hilly certainly came in handy. I wisely brought my own water bottle with Gatorade as the first water stop was insane with people slowing if not stopping all over the place. The crowded course would continue for several more miles.

My bladder began insisting it needed to be emptied. I told it to shut the hell up. It responded by giving me mild lower abdomen discomfort...for the whole damn run. Bladder..I hate you.

Animal Kingdom was the first park we ran through. I really love this park at night but found that since I was still in a packed crowd and eyeing opportunities, I couldn't really enjoy the surroundings as much as I hoped. There were several tight spots where we all nearly came to a full stop. Various cast members and volunteers lined the course cheering us on. Elements from the Animal Kingdom parade were visible along the course as well.

Leaving Animal Kingdom it is was back down Osceola Pkwy. The Spectro floats were still out, as well as some musical entertainment. Around mile 8 my left ankle started to hurt. What the hell is wrong with my ankle? This never happens to me. I honestly had no idea why it was hurting (duh) but was thrilled that the crowd seemed more open. 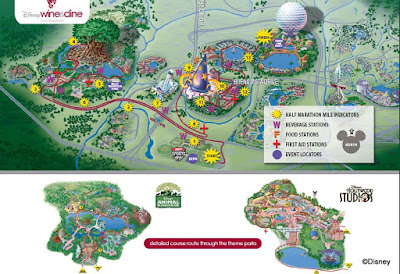 Making our way down onto World Drive, a green army man from Toy Story yelled at us to "Take that hill!" and sure enough we were coming up on a dimly lite incline. My ankle did not seem to like this at all. The fact that the road banked as we went up and then down to World Drive, did nothing to help. My bladder suggested that perhaps the ankle would feel better if we stopped ....and oh hey we could use the potty. I pretended I didn't hear that and kept on trucking.

My plan had been that once I hit the Studios I would kick it hard for the last 4 miles. But my ankle would have none of it. Other folks must have had the same plan as several runners started to pass me. We entered the Studios behind the Tower of Terror. Mr. Incredible and Elastigirl greeted us, with music from the film blasting; pretty cool. We ran in front of the Rock N Roller coaster and then in front of the Tower. As we hung a hard right to double back through the queue of Fantasmic a volunteer yelled "Hill coming up on your right!". And it was a nice steep incline. My ankle screamed, I whimpered and my bladder laughed.

We ran all over the Studios and even though my ankle was feeling worse and worse this was my favorite part of the run. The course took us past Toy Story Mania where Woody was out front waving at us. Then we went through part of the back lot tour and ended up on the floor of the Lights, Motor, Action! Stunt Show where I got to see myself on the jumbo-tron. Hello me!

From there it was up New York Street where the Osborn Family Christmas Lights were on with Christmas music playing, which was a cool surprise. As we rounded the corner and headed past Star Tours the Imperial March could be heard and Vader himself was out front for photos and force choking.

Before I forget, let me say that the Cast Members and volunteers working the course were great. Lots of cheering, high fives and fist bumps were offered for those runners that could muster the energy. I think I hand slapped a whole line of volunteers at one point which was kinda cool and gave me an adrenaline boost. Big thanks peoples!

Leaving the Studios we were on the last mile and each step was killing my left ankle. Part of me briefly wondered if I should walk, but I refused to give in. The last half mile to Epcot took us past the Yacht and Beach Club resorts were A LOT of people were lined up to cheer us on. That gave me a charge and I ran as fast as I could to the finish; pain and all. As soon as I crossed the finish and started to walk, I began falling on my leg side..almost as if I had....TWISTED MY ANKLE! It all made sense. My bone headed move before mile 1 caught up with me. Stupid stupid stupid. It could have been way worse, I could have stepped in a big hole, done a face plant and I would have been out. Before mile 1. Idiot.

I wanted to finish in 2 hours or less and looking back, I shouldn't have been so focused on the time, especially for my first half marathon. I ended up finishing 2:16:24 and placed 1945 out of 7275 finishers. I met my brother at the Epcot after party and spent some time beating myself up about my time and my rookie mistake. He pointed out "dude you ran 13 miles...I couldn't run 2" which gave me some perspective. One year ago I could barely run two miles and now I've completed a half marathon, which, regardless of my time, feels pretty damn good. All and all it was a lot of fun and I can't wait to do it again! 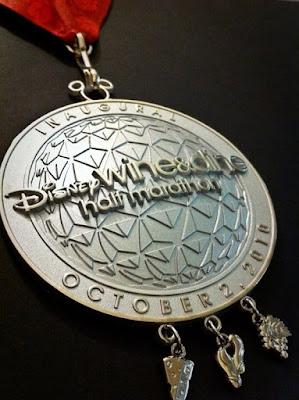