Horton Hears a Who

Powered by AOL Video
Posted by RayChase at 2:51 PM 1 comment:

Who Needs a Kwik E Mart?

As I am sure you are aware, several 7-11s have had a make over to look like Kwik E Marts from the Simpsons show. Lots of photos have been on the net for awhile, but hey why not post some more? The other week, me and my buddy Ernesto visited the one near the studio....and these are our pictures... 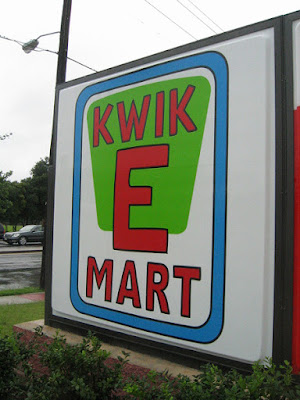 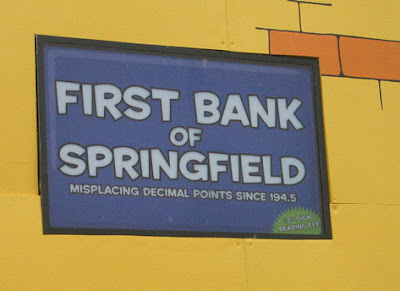 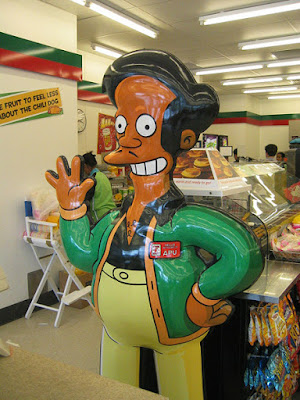 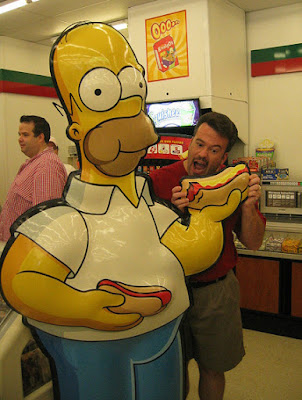 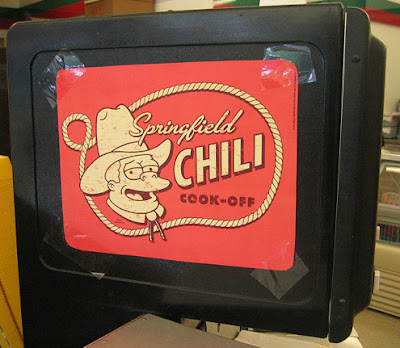 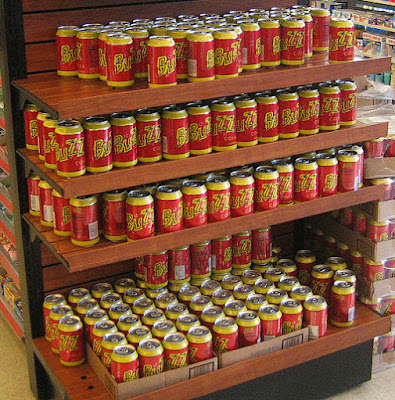 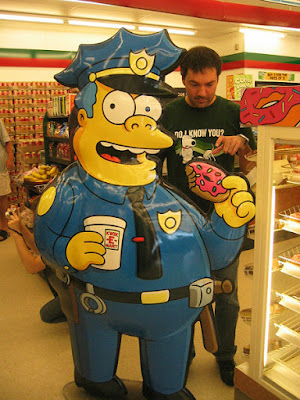 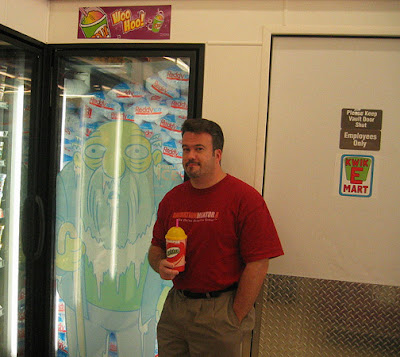 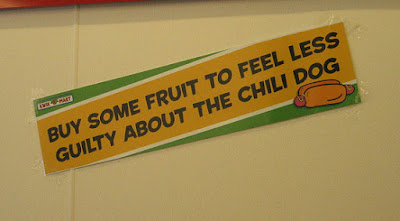 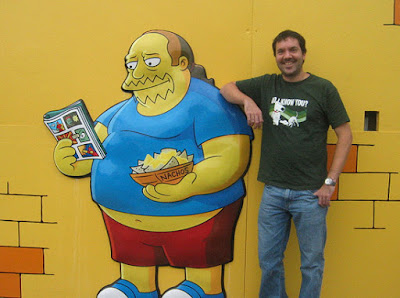 Posted by RayChase at 4:56 PM No comments: 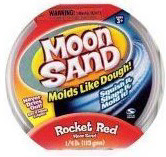 So on a trip to the Toys R Us we picked her up some. And from the moment we opened the package I began hating Moon Sand with every fiber of my being.

Our kit came with an ice cream cone mold. Yes when you pack the moon sand in the mold it makes a pretty nice little shape. Removing the shape from the mold requires a surgeons steady hand. If you're lucky enough to remove it in one piece you have about 5.3 seconds before it falls apart.

The packaging shows these elaborate little scenes made up of various molded moon sand figures....yeah nice photoshop. After several tries, I managed to make and remove, intact, an ice cream cone. Moving carefully, as if holding plutonium, I sat it on the table. I slowly backed away holding my breath. I caught Wonder-peas attention and through a series of rapid eye darts, directed her attention to the ice cream cone. Unfortunately the shock wave from her blink was too much and the figure crumbled.

Wowie!! That was fun. NOT. So this junk is mostly useless to play with, but hey clean up is a snap right? RIGHT???!!! Cleaning up the moon sand is the bane of my existence. Like sand we find here on earth, moon sand is gritty and gets everywhere. We might as well bring the sand box in the house because it's like having all the messy fun of the beach right there in your own home!!! I want to punch the inventor of this stuff in the neck....seriously.

I have threatened to throw the moon sand away numerous times but my wife prevents me from doing so because Wonder-pea likes playing in it. And that is fine...its the damn clean up.

Hear me Moon Sand...your days are numbered.
Posted by RayChase at 12:16 AM 3 comments: 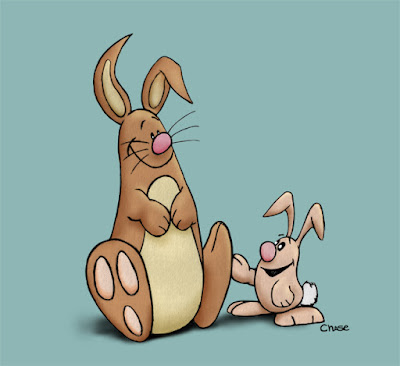 So the other day a small group of us headed out of work a little early to catch Transformers. While critics have been split on the film, geeks like me seem to be digging it, so I was reasonably excited to see the movie. The lesson I learned was: don't trust geeks.

**Some spoilers and complaining ahead....you've been warned**


Having worked on the game I was aware of the basic storyline, which raised many an eyebrow around the studio and not in a good way; Autobots shop on ebay?...was Optimus' birthday coming up? What to get the bot who can transform into anything.

Then there was the robot design. Again having worked on the game I knew first hand what a pain in the rear it was to get good poses with these huge meshes of metal AND how hard it was to tell them apart from each other.

I appreciate the set up at the beginning of the film and thought it was well done, however it went on f-o-r-e-v-e-r. I swear it was 45 min in before Optimus even showed up. And then when he and the other Autobots did come on the scene they act like people in robot costumes. Jazz break dancing? Bumblebee doing some kinda....dance thing....dancing should be outlawed in summer blockbusters.

After the movie was over I asked Bryan Engram what he thought, to which he replied "I don't know what to think." That was pretty much how I felt. On one hand there was some cool action scenes and some neato transformation animation and bot on bot battles; at the end of the day that IS what we came to see. But at the same time most of those action scenes were hard to follow. The camera was constantly moving and pushed in too close. And then there was the bots.

I have no problem with them being redesigned. And I think ILM did a decent job with what they had to work with but man oh man most of them bots were just too busy looking. Did they even have hands? There was so much metal this and that everywhere it was hard to tell.

During the final battle I literally lost track of who was attacking who.....ok is that...Ironhide?....no wait...Barricade....no...NO it is Ironhi.....wait...... If they shot laser beams (hint hint) instead of bullets (advance alien race....they use bullets?) then at least the Decepticons could have red lasers...the Autobots blue...which would have helped A LOT to figure out who was shooting who.

One of the best scenes was the throw down between Bonecrusher and Optimus on the freeway, but once they started rolling around it was like watching a mangled train wreck; there could have been major pass through on the characters and no one would EVER know. That sequence ended with awesomeness when Prime wacks off Bonecrushers head with a sword...a sword that he apparently forgets he has in the next battle.

Then there was the cheese. Why....WHY would the Autobots hang out in Sam's yard when they are supposed to be keeping a low profile? It's like Michael Ebay was going for an Iron Giant moment there. John Turturro was just a tad or 10 over the top....funny sure....but goofball secret government agents? Really? Bumblebee taking a leak on Turturro......oh you wacky robots, I want to party with you guys on new Cybertron......sigh...

How about that robot character development or lack thereof. You will sell more toys if the kids connect with the characters....some free advice for the future. We get to know Optimus a little and Bumblebee and the toony "I'm from a different movie" Frenzy and that's it. Megatron has too little screen time to be developed and the other Decepticons just fly around and break stuff.. which is cool, but one of the things that was neato about the bad guys in the old show was the power plays between Megatron and Starscream and its just not here.

Ironhide, Ratchet and Jazz....I can barely remember what they looked like let alone what they did in the movie. Jazz got killed...I remember that. Here Optimus...here is Jazz' dead body...maybe we can use him for a door stop or something.

Analyst girl and donut eating hacker dude: how did you sneak into this movie? There was no need for either of you...please leave; the code "discovery" could have been reworked without either of them.

Shia LaBeouf I really liked you in this movie....yes its true. His Sam character tied all the nuttiness together and he was fun to watch. I actually left the theater feeling better about this kid being in Indy 4.

All Spark....200 feet high...but wait, if you push this button here it shrinks down to ever so convenient pocket size, Baby Spark. Yeah...ok. And why was every bot created by Baby Spark evil?

Optimus please keep your mouth shield ON in the next one. I don't want to see your wacky bot nose and lips. If you were trying to emote during the film, it was lost due to so many parts moving around on your face. Sell the emotion with your eyes...the EYES...come on big guy, you know you got the touch, you got the power.

Megatron saying "Prime"....yes I liked that....say it again...no? maybe in the next one. Hugo Weaving voiced all 12 lines Megatron spoke in the film and with all the digital enhancements, SpongeBob Squarepants could have done the voice and it would have sounded cool. Why didn't they just get Frank Welker?

The film was fun, I was entertained....really I was, but it wasn't the film I was hoping for or expecting. Hopefully Transformers 2 will be WAY better.
Posted by RayChase at 12:46 AM 3 comments:

Transformers officially opens today although it sorta, kinda opened on Monday. In stores at this very moment is Transformers: The Game. If you haven't seen the game trailer head on over to the official game site and check it out; looks like a lot of fun.


ReelFX did some of the cut scene animatics for the game and I've posted several of my shots in the animation area. A word of warning!! If you have NOT seen the movie, there are a couple spoilers in my shot montage, as the game follows events in the film. You have been warned.
Posted by RayChase at 10:23 PM 3 comments:

With "Live Free or Die Hard" doing fairly well, it looks like yet another Die Hard film is on the way... 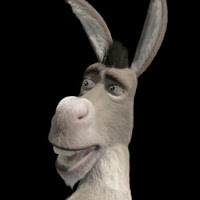 I uploaded a Donkey test to the animation area. It's in a brand new tab aaaalll the way at the bottom, called TESTS.

Before we started the Shrek the Third commercials, we spent a couple weeks playing with the rigs, providing "shots" for texture and lighting so they could get the fur looking the way Dreamworks wanted.

Also there is new poll up...yay! Look over there...there it is...see it? I said I'd post a new one on Mondays and by god I did. Shocking I know. I half expected that I would forget all about it.

A future poll will question how long I will remember to update the poll.
Posted by RayChase at 12:57 AM 2 comments: