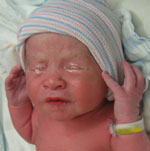 Next Thursday we had a C-section scheduled, but apparently my son did not want to miss Halloween and decided to come.....today!!

Lil Pumpkin didn't make a lot of fuss when brought from his warm, liquidy home, into the big bright, cold world. He was kinda like "WAAAAaaaa..... ooo this blanket is nice.. oh I get a hat too?....sweet...I'm digging this".

Both Mom and baby are doing great and Wonder-pea is super excited that her brother is finally here.
Posted by RayChase at 11:30 PM 12 comments:

This week is my first submission.....well..2nd...sorta to Drawer Geeks! Every two weeks at DrawerGeeks.com several talented folks post drawings based on topics ranging from "Childhood Nightmares" to "Godzilla". I used to almost, be sort of, not too bad with the whole drawing thing but to be honest I haven't really drawn in a long time.

So here is my first submission for "Movie Monsters", which as it turns out was for this weeks topic last year. Big thanks to Tony Bonilla for giving me wrong information. I will get you Tony...oh yes.. 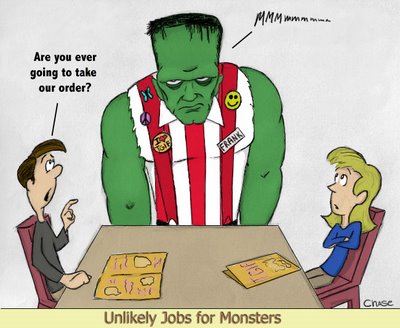 And then there is my real first submission for the topic "Grim Reaper". Not as super ninja awesome as a lot of the other fine art work on the site, but it's a lot less painful than a hot poker in the eye. 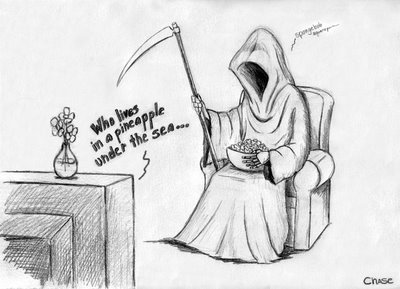 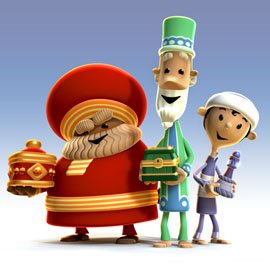 Recently, I completed animation on my first project for ReelFx called The Very First Noel, which is the story of the three wise men.

The project was a lot of fun and was probably the smoothest production I have ever been a part of to date. The web site has just gone up, so drop by and take a peak.

Hopefully TVFN will be on broadcast television this holiday season before making its way to DVD shelves near you.
Posted by RayChase at 3:20 PM 7 comments:

Prepare to Be Pitied 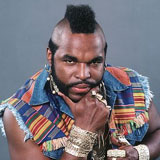 Next week TVland premieres Mr. T's new show I Pity the Fool, not to be confused with Mr. Ed's new show I Pooped in Your Pool. If I have learned but one thing from watching the A-team, it is that duct tape can be used to hold anything together: tanks, planes, the spaceshuttle, anything. The second thing I learned was that everyone and everything, can and will, be pitied by Mr.T.

The sneak peak of episode 1 looks both totally insane and completely awesome as Mr. T works his magic at a used car dealership. Notice how he makes the word "motivation" appear out of mid air; he truely is magical. But things heat up by the end of the clip and me thinks next week some chumps will have their jibber jabber cut short as T tosses them over the camera; just like in the old days.
Posted by RayChase at 1:42 AM 1 comment:

Where a Kid Can Be a Kid

Today we took Wonder-pea to Chuck E. Cheese for the very first time. This particular CEC was lite on the video games yet heavy on games and rides for little ones. Since we had a little one with us this worked out well.

I remember when I was about 13 there was a CEC like joint called Showbiz Pizza Place. This place rocked with tons of the latest arcade games, but one day the games began disappearing and ball pits and wack a moles sprang up. Then Showbiz got bought by CEC and that was the end of that. Anyways....

After eating some delicious pizza made by Chuck E. himself, me and Wonder-pea hit the games. And the game of choice was skee ball, which is not only fun but extremely dangerous when playing with my daughter. She hasn't quite mastered the idea of rolling the balls. She much prefers to throw them.

During a skee balling attempt in Disney World, Wonder-pea managed to throw balls into other lanes, at neighboring games and at passers by. She seemed confused that beaming Goofy in the crotch didn't produce extra tickets.

Today, however, we had a system. She would hand me the skee balls and I would roll them. And we were doing pretty well. After several games we had a whopping 44 tickets. I noticed that if you got a score of 450 you would get 200 some extra tickets. Seeing as how I could barely break 180 points this seem virtually impossible for anyone in the place......

...until another Dad managed to hit 460. An alarm went off....balloons fell from the ceiling...Chuck E came out and gave him the key to the restaurant....children were cheering. It was beautiful.

My mere 44 tickets seemed poultry compared to the riches that awaited anyone who got the 450 score. What can you get for 44 tickets? I figured I would at least try and see if I could be as cool as this other Dad. I noticed that his key to success was sinking skee balls in the hard to hit 100 point hole. This was something I have never done because basically I suck at skee ball. But I wanted those tickets and the praise from Chuck E.

Wonder-pea was still enjoying pressing the coin return and passing me skee balls, so what the hell...I made a go at hitting the 100 point hole. The first couple tries weren't pretty, ending in a score of less than 100, but eventually I managed to sink 2 100s in one game. Wonder-pea was super excited that our usual three tickets had turned in to fifteen.

One little girl had her hands over her ears scowling at me because the alarm was really, really loud.

After standing there with the alarm blazing for 10 minutes an attendant finally came over and gave me my 200 ticket prize. All in all we had gone from 44 tickets to 340. And we were heading to the prize counter!! 340 tickets!! We are getting something good baby!!

Of the various junk levels of prizes, Wonder-pea wanted the 15 ticket items. She left the prize counter with 40 tickets worth of bracelets and rings. Apparently 44 tickets was all we needed. The other 300 are in my wallet....
Posted by RayChase at 8:24 PM No comments: